Growing up an only child, I always wanted people around. Cousins, friends, mates, whomever, long as I didn’t spend a sprinkle of time alone. Then something changed.

Over the past few years, I realized that I’m not as extroverted as I’d once thought. I was padding myself with people to mask what was going on internally. Once I minimized the chatter, and listened…it was clear. I was depleted.

I wasn’t surrounding myself with the right energy. I was too busy avoiding stewing in ME that I was letting any & everybody up in my space. Eventually, I got selective and allowed in only those who nurtured my spirit.

This is taking some practice because my old ways  keep poppin’ up when things don’t look like they’re going as planned. But, that’s to be expected. I just press onward.

So, fast forward to present day and me being the hermit crab & social (media) butterfly that I am (since I can’t people for real). I posted this rant on Facebook: 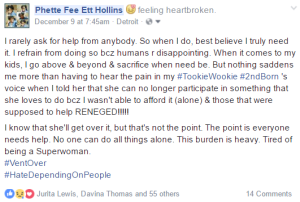 I rarely rant. Rarely. But a chain of events happened that caused me to have to take my 10 year old daughter out of the acting/modeling classes that she loves. When she started crying, that took me over the edge. So I took to Facebook :-).

Honestly, I wasn’t looking for a handout. I wanted to subliminally shame the culprits. Just call me Peppermint Petty. Petty Boop. Petty LaBelle. Petty Wap. Any of those work fine.

I received an outpouring of texts and inbox messages from folks expressing their concerns. I appreciated their concern as well. But one message stood out.

Like most of us, I don’t interact in “real life” with all of my 1,755 FB friends. I can count on one hand how many I do see in real life. So, when I got the inbox from my classmate, who I hadn’t seen since high school, I didn’t think anything of it.

She asked what was going on. I told her. She asked how much my daughter’s classes were. I told her that, too. She asked if she sent $500 would that be enough.

Facebook messenger be on some bull shiggity. So, you know how you can see notifications on your phone’s lock screen? That’s how I knew I had a message to begin with. But when I went into messenger to fetch it, the message WAS NOT THERE!!!! I scrolled and swiped and absolutely could not find it. Naturally, I thought I was bugging. It’s early in the morning. I could be seeing things, right? Nahhhhh!

So, I typed in the friend’s name in the search bar –YES I HAD TO DO ALL OF THIS. Her name came up. I clicked on “MESSAGE” and there it was.

After I picked my mouth up off the ground, I replied “Heck yeah,” and thanked her ad nauseum. She asked for my email address and sent the money in minutes, with a note that said “Happy Holidays.”

I was DONE! Do you hear me? DONE SON (in my New York accent). I was so happy I squealed like a mouse and was bouncing up and down on my bed. I asked if I could give her a shout out and she said yes.

This woman got it going on. She’s a BOSS (literally) at Coca-Cola. She has a beautiful 10 year old daughter, and a mighty handsome husband. Toya, again, I thank you. Most of all, Rica thanks you. ❤