Unlike my last post, *you can read it –> HERE <–*, I got permission to post the photos I’m about to post without having to mask the face. The ones you see with the masks are, in this case, innocent bystanders. 🙂 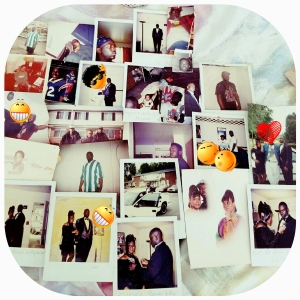 I got so many pictures of this dude I had to make a collage, or else this would’ve been the longest post in the history of long posts. And these aren’t all of them.

I got so many pictures of this dude because he was my first love –in the eyes of my 14-year-old self.

This is what I looked like when he first pursued me, when I was 13 years old.

Low key, I think I was scared to give him a chance because he was so big & black. He looked like a 30-year-old man at the age of 17. I ain’t want no parts of that…but he was relentless.

This is what I looked like when I finally gave in, minus the fuchsia (this is how it should be spelled despite what’s written on the pic) tips.

I was a demure teen and he was an outgoing street ninja. I was squarer than a cigarette and he was cooler than a fridge. I liked that about him.

We spent a lot of time together…when he wasn’t spending it with other chicks.

He’d invite me over and, by the time I walked the 3 blocks or so to his house, he was gone. I’d wait for hours. This was before cell phones, and before we could afford beepers.

I stayed with #Ninja4 for 4 years, off & on. You know how that goes. After he got a girl pregnant within 1 year of us going together, I was all cried out and decided to join him at his game.

Tony was the 1st in a string of victims. He was so good to me. He was nice. He carried my books. Walked me to all my classes. Took me to the movies. Took me fishing. Just good to me. But you know we don’t like them nice ones.

It was like he knew my every move. He knew when I had company. Even knew when I was planning on having company.

He taunted & tormented poor Tony for months, until he finally broke up with me. #Ninja4 won. So, I went back to him.

I tried dating 2 more people and he bullied them away. The 3rd one he actually got into an altercation with, on Superbowl Sunday 1993. But this one wasn’t so easy to get rid of, considering I was pregnant by him.

Everything changed after this. I had #Ninja4’s full attention now. He stopped messing around with other girls (I think), and vowed to be there for me and my unborn baby, even though he wasn’t the biological. Turned out, back then, the biological didn’t want anything to do with his seed. He eventually changed his tune. I wrote about it in –> THIS POST <– a day after he passed away suddenly in 2012.

And whudduya know? After getting a girl pregnant while we were together, cheating on me incessantly, the break ups, the make ups…Now, I didn’t want him anymore.

It was in that moment as I sat in a motel room with him & my 4 month old baby with nowhere to go that I decided I wanted more. Being a street dude’s girl wasn’t cute. So, I left for good.

Back in October 2016, I spoke with #Ninja4 and it dawned on me that I didn’t fully gain closure from ending our relationship. I bounced and jumped and hopped into numerous relationships after him. Repeating the same patterns. Never resolving anything. Not sitting still long enough to listen for the next, right move. If you hurt my feelings, I retaliated. I was good for doing tit for tat. Not knowing that I was only harming myself.

Stories connect & heal us. I share my stories as a means to celebrate growth with the hope that we can get & stay unstuck –4eva! Share this site with those who are looking for a laugh & a lesson…and some healing.